Zitheroos are used in homes, family centers, “parentcafés”, kindergartens, after-school programs, clubs, music playschools, elementary schools, but also in delivery and children’s wards, centers for the handicapped, mental hospitals, and in homes for the elderly and those suffering from dementia. Music therapists and physical therapists working to improve fine motor skills with stroke patients also use them. 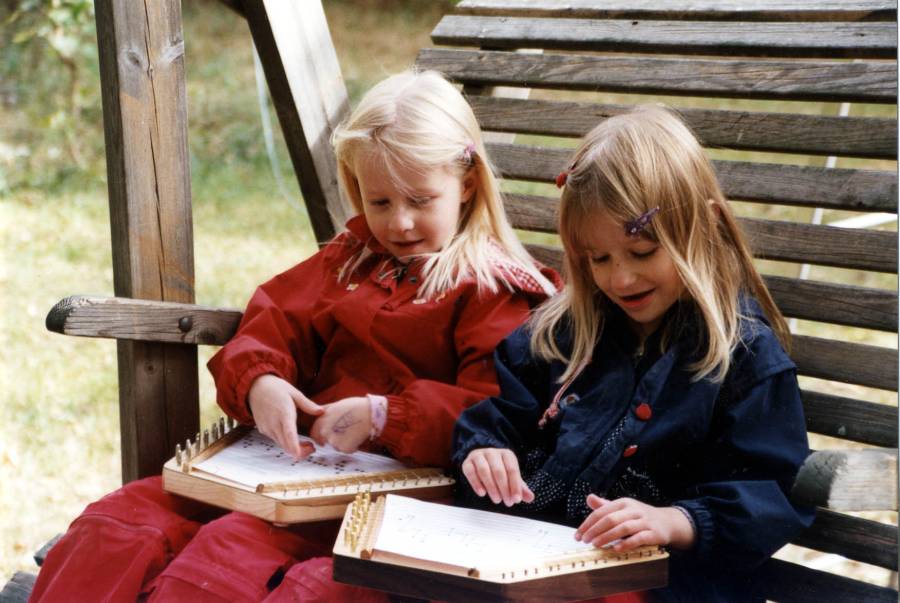 Zitheroos are popular among parents with young children (and even among expecting parents) since they can make music for and with the children, without guidance or the need to attend a course. It is important that parents speak and sing to young children, of course, but the zitheroo can also help get them singing. And for those who feel uncomfortable singing (as a number of fathers seem to do) the zitheroo offers a way to make music with or without singing. Children from age 3-5 on can follow the songsheets and the zitheroo can be a starter instrument which ignites an interest in music and gives the child an “I can do it” attitude toward music making – something which can be important in terms of interest and engagement later on. 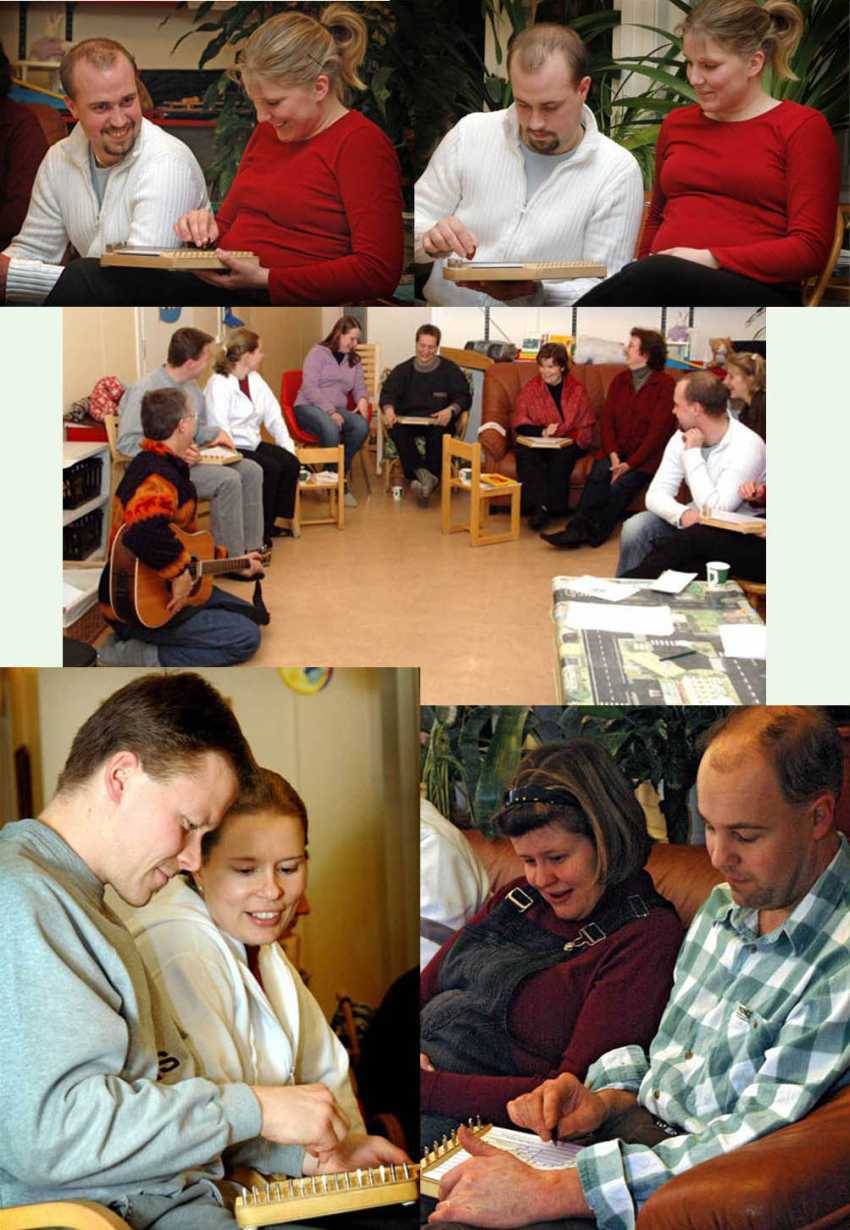 Family centers where expectant parents form groups which meet multiple times both before and after the baby’s birth are relatively new in Finland. Zitheroos have been used in conjunction with presentations about the development of infants’ senses and the role of music and song in the parent-child relationship. All expectant parents have played zitheroos together and through this gotten a start: it can be easier for some to pluck strings on a small instrument than to open their mouths and sing in the presence of a group, but when the playing commences things tend to loosen up and everything hums or sings along. Zitheroos are used in similar ways at “parentcafés”, perhaps with a zitheroo available for parents or children to play on when they so wish.

Quite a few day care centers have purchased 5-10 zitheroos for group use in connection with music sessions, often with guitar or piano accompaniment. Zitheroos have been especially popular at Christmas concerts and end-of-year programs. Zitheroos are also used during free play by individual children who may sit somewhere and play awhile, or two or three children who either take turns playing or play on a couple of instruments. Since the sound of a zitheroo is light and airy, this is seldom disturbing to others. Interestingly, children have been seen sitting each with their own instrument at the same table, all 4 playing different songs and totally involved in their own music. Zitheroos have also been used as a pleasant occupation when a child arrives earlier than others or has to wait awhile after others have gone home. 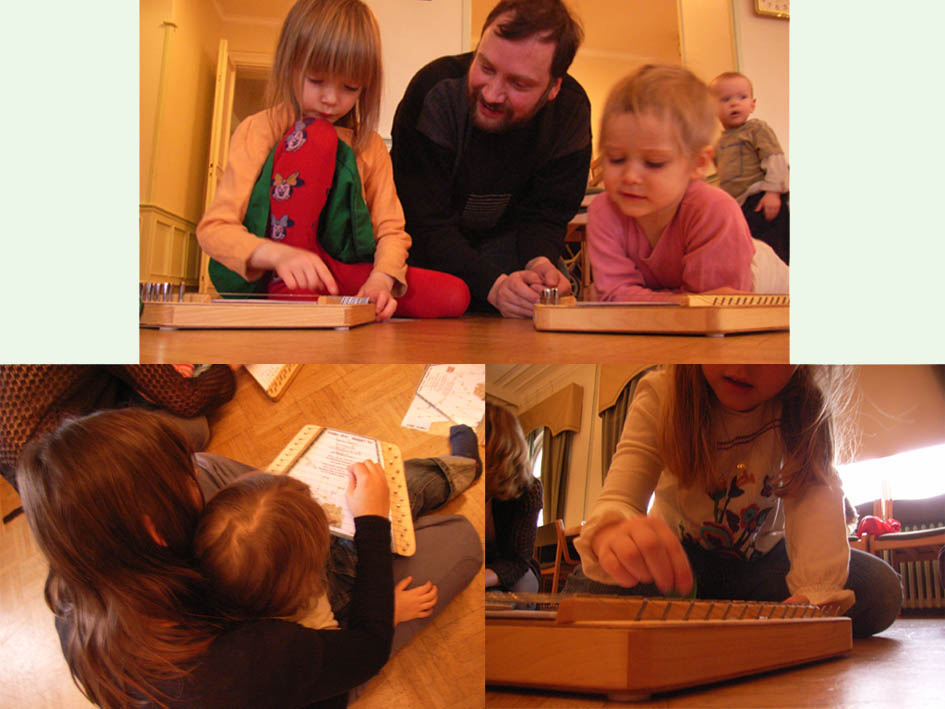 Children are able to follow the song sheets from as early as 3 years of age, and can certainly manage to play familiar songs in kindergarten (age 6 in Finland). Zitheroos can also be a suitable first melodic instrument in educational settings with groups of children of diverse backgrounds and capacities. Elementary schools have found them useful even among the upper classes where more difficult rhythms and playing in parts can be introduced.

Since a song sheet is a sort of graphic “ECG” of the melody where intervals can be discovered by counting strings, there are some advantages in using the zitheroo as a tool in teaching music theory. On song sheets which use normal notation and rhythmic values, the first note in each measure is marked by a colored background behind the note, making it easy to work with rhythms. Rhythmic values are also color-coded (blue for quarter notes, red for eighths). 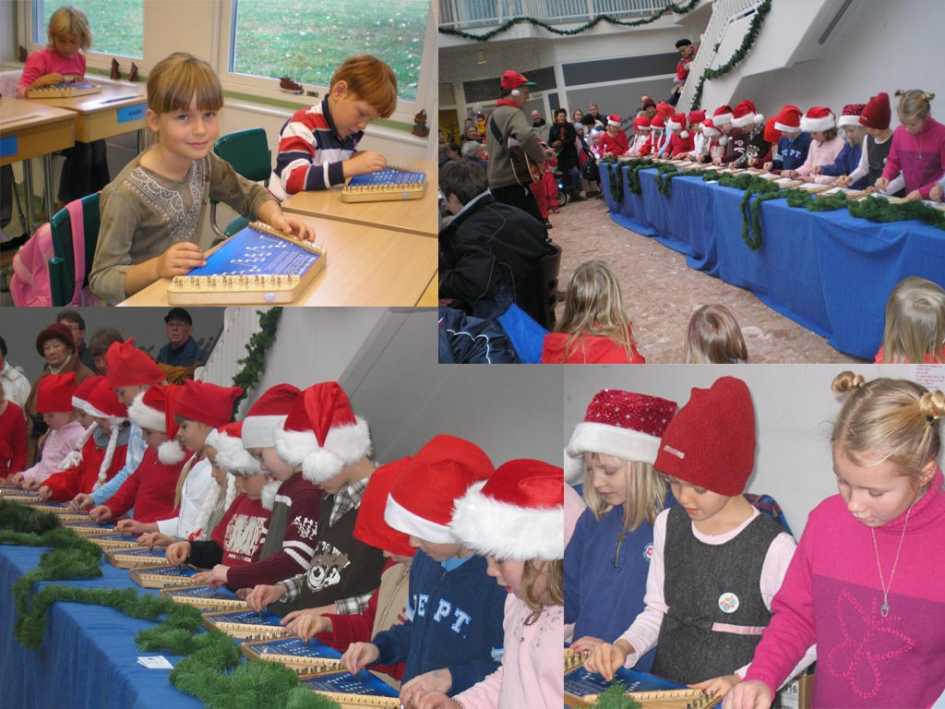 A project using zitheroos in the delivery ward of Västra Nylands hospital was started already in 1998. Since delivery ward stays were usually 5-7 days, the idea was that parents, older siblings, or others could take the instrument to their room and play for the new baby. It is of course a way of encouraging song, since the lyrics are on the song sheets and it is natural to hum or sing along. For older siblings, playing the zitheroo can be a way of doing something nice for the baby, while at the same time being pleasantly occupied during visits.

Children’s wards have used the zitheroo as an instrument to keep children happily occupied, placing it in day rooms. One young patient lying in bed for weeks (also over Christmas and New Year’s) after a back operation was pleased to be able to play Christmas songs while lying in bed.

CENTERS FOR THE HANDICAPPED

The zitheroo is used both in children’s wards and in occupational therapy in mental hospitals. My own experience from Ekåsen hospital’s children’s unit showed that the zitheroo served very well as a tool to get children (“even boys”) singing and playing. It only took a couple visits before Christmas to introduce the instrument, after which the children performed at the unit’s Christmas party and thus “led” the sing-along with parents and siblings present. The sense of accomplishment facilitated by the zitheroo is of course important for all people, but especially for children with psychological issues which often involve negative self-images. I also don’t think it would have been easy to get these sensitive boys and girls to sing (and thereby “expose” themselves, show vulnerabilities – song is very personal!) if the focus had not first been on something less personal: plucking strings on a small musical instrument.

Maintaining their personal and cultural identity is of great importance when elderly individuals find themselves in anonymous institutional environments. Familiar and popular music can be of real help in this. I find it interesting that more and more institutions for the elderly and those with forms of dementia have been ordering instruments, since my first thought was of the zitheroo as an instrument for children. Many nurses feel anxious about leading or using music, but with the “nonthreatening” zitheroo they feel more secure. It also turns out that a number of those living in homes for the elderly, also persons with dementia, can play the zitheroo. Shaky hands and poor eyesight can make things tricky, of course, but one dementia center showed my that elderly had an easier time of it when the song sheets were copied onto colored paper instead of white – and that yellow paper was best. It was nice to see this staff engagement and learn new things. NOTE! The zitheroo can also be handy when grandchildren come to visit: it can be difficult for children to know what to do on visits to grandma, but if a zitheroo is available, the child can play tunes, keeping occupied and also performing a welcome “service” for grandma and the family.

EVENTS AND SEMINARS WITH ADULTS

Adults also like to play, and music can in just a minute or two create a sense of community and help a group establish communication at the beginning of a conference program, for example. 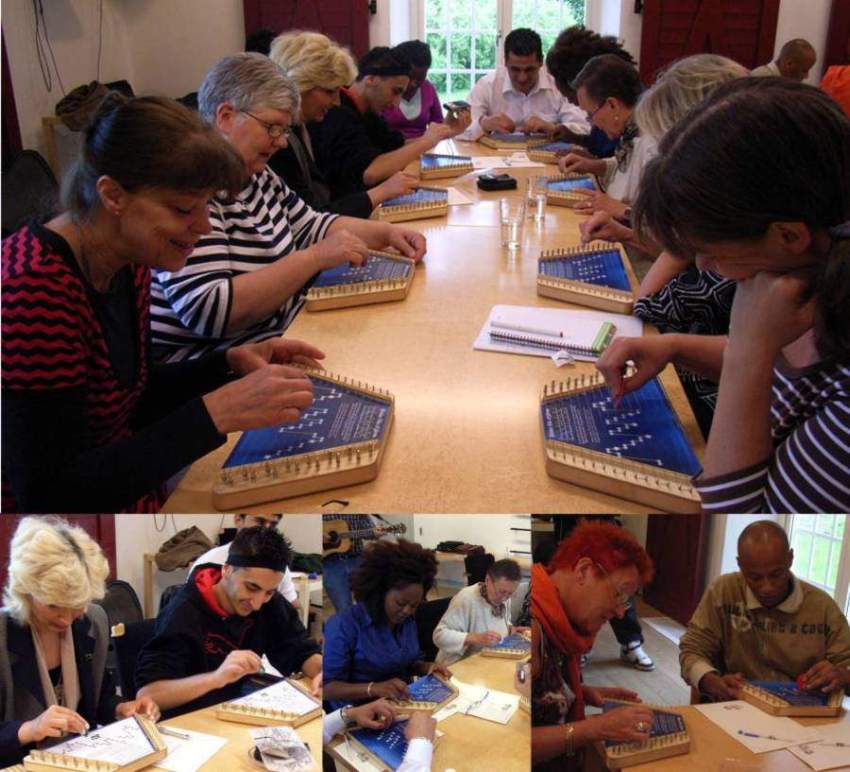 How do you use the zitheroo? Please write and tell us!   info@treehousemusic.nu

(Use with Transposer to write out favorite songs from books, or compose your own)